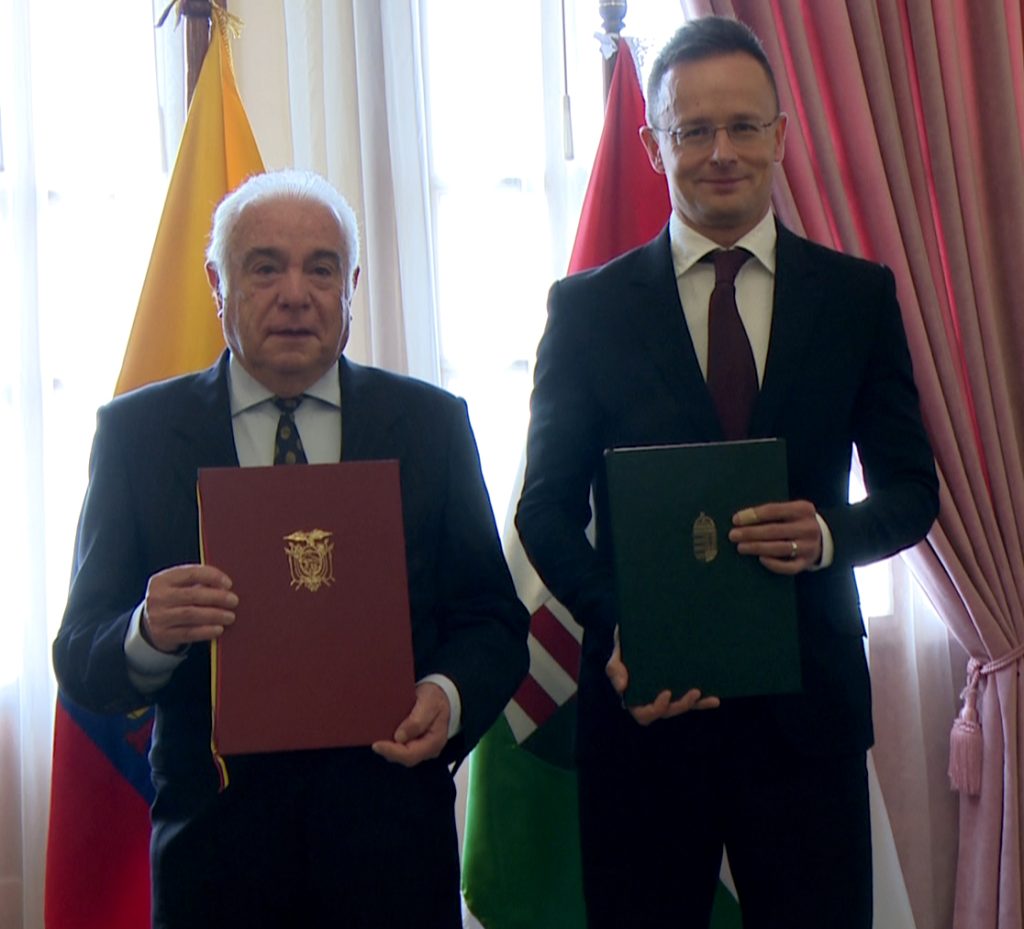 This Ministry of Energy and Mines release was published using machine translation.

Technical cooperation by the Republic of Hungary, for the strengthening of projects related to the exploration, development and use of hydrocarbon resources. As well as the improvement of refining processes and the promotion of petrochemicals, are some of the points contemplated in the Memorandum of Understanding, signed between the Ecuadorian Energy and Mining Portfolio and the Hungarian Ministry of Energy, this January 19 in the halls of the Palacio de Najas belonging to the Ministry of Foreign Affairs and Human Mobility.

The document signed by the Minister of Energy and Mines, Fernando Santos Alvite; and the Minister of Foreign Affairs and Trade of Hungary, Péter Szijjártó, has the objective of promoting relations between both countries, through the coordination of entities and public companies in charge of hydrocarbon development, to maximize contributions on issues related to the strengthening of the oil industry.

The Memorandum, which is valid for two years, also establishes the equitable participation of Hungarian oil companies in tenders for the exploration and exploitation of hydrocarbons. As well as the possibility of developing projects for the industrialization, transport and commercialization of crude oil and its derivatives.

The Minister of Energy and Mines, Fernando Santos, described the signing of the document as positive. “These mutual cooperation agreements contribute significantly to the goals of attracting foreign investment and increasing the country's domestic crude oil production. The Memorandum also opens the door for the training of personnel in matters of exploitation of oil, natural gas and its derivatives, internships in development and activities of production of hydrocarbons and its derivatives" , highlighted the Authority.

The documentation is also focused on prioritizing academic training through the organization of seminars, conferences and meetings in relation to the hydrocarbon markets, natural gas, refining processes, petrochemical industry, among others. Similarly, the exchange of experiences and information in relation to exploration and production (upstream) and transport and wholesale marketing (instream).

The signing act was also attended by the Deputy Minister of Foreign Affairs, Luis Vayas Valdivieso; the Ambassador of Hungary in Ecuador, Miklós Tamás Paczuk; the Member of the Hungarian Assembly, Mónika Bartos; and the Undersecretary of State for the Development of Relations with the countries of the South, Lászlo Váradi.

The National Government promotes the rapprochement and promotion of effective international relations in order to promote the country's hydrocarbons industry, through attracting investment and the exchange of professional experiences that benefit the development of the Ecuadorian industry.

Want to read more information about Hungary and Ecuador finalize the memorandum for the strengthening of the national hydrocarbon industry?