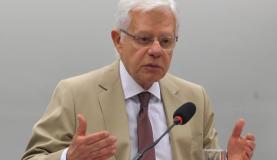 The Brazilian PPP model put together by the administration of suspended president Dilma Rousseff could soon be history. The new investment partnerships secretary Moreira Franco (pictured) signaled the whole infrastructure concessions program needs to be overhauled.

Franco, in charge of concessions, public-private partnerships and privatization issues in the country, was quoted by news service O Financista as saying, "There is no transparency, and neither is there competition... When competitors are the same in all sectors, it's because there's something very wrong."

The current model drives away investors as it encourages a market dominated by only a few groups, many of which are led by companies targeted by the federal police and its Lava Jato corruption probe, the news service reported.

At the top of the official's agenda is the creation of new PPP rules, followed by a move to attract more companies. Amid a lack of capital from national development bank BNDES, new sources of funding will be sought, Franco said.

Successful PPPs are critical for interim president Michel Temer to generate employment and improve infrastructure. His administration is seen as facing a major challenge in boosting investor confidence and helping the country emerge from economic slump.