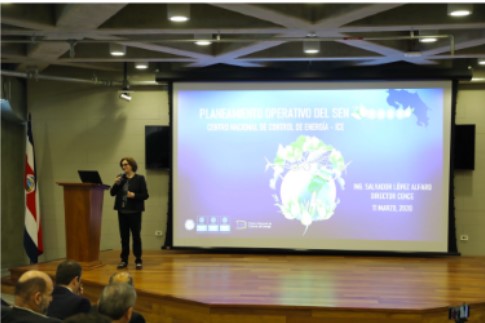 On Tuesday, the National Center for Energy Control (CENCE) presented its annual power generation projections to the different national sectors and the media.

The installed capacity, the weather conditions and the interconnection with the Regional Electricity Market (MER) allow to conclude that the risk of electrical shortage in the country is nil.

Salvador López, director of CENCE, presented the most likely scenarios for the coming months. The analysis of the Center indicates that 2020 will be a year of average conditions, with a first dry to neutral semester and a second semester wetter than usual, due to the trend towards the La Niña phenomenon.

“The country has its electricity generation needs covered. The incorporation of Las Pailas II, last year, will help in this dry season we have more firm energy that does not depend on the weather, which will allow us to optimize resources such as water, wind, sun and biomass, ”he said Lopez

In addition, he said that the fall of rains in the country during 2019 - 20% less according to the authorities - led to 2020 being a year for the Arenal reservoir to recover. This body of water of 88 square kilometers is the only one in the country that can store water from a wet period to be used in a dry one.

For his part, Irene Cañas, executive president of ICE, said that “Costa Rica is a global example in the administration of natural resources to guarantee a renewable electricity supply. In addition, this event is a sample of the transparency and the approach that we are looking for in the ICE with key actors ”.

The Institute incorporates all the private generation - available in the national market - before importing. During 2019, Costa Rica saved $ 47.68 million by buying in the National Electricity Market (MER) the electricity needed to complete its demand instead of generating it with local thermal plants.

López concluded that the use of thermal backup - with average hydrology figures - will be at the level of the last five years; that is, it would not reach 2%.

Between 2016 and 2019, ICE removed three thermal plants from operation - Moin I, San Antonio and Barranca - for the addition of others that use renewable resources.

ICE redefines strategy for operation and control of its electrical system

CENCE will be called Division of Operation and Control of the Electrical System (DOCSE); Change will be effective as of January 25, 2023; Institute...

During December and January negotiation tables have been held; Private producers do not accept on-demand purchase conditions proposed by the Instit...

Costa Rica: ICE is the first electricity company on the continent that certifies the use of renewable energy to its...

Costa Rica: ICE electricity rates will remain stable and without increases for next year