President Vizcarra highlights the execution of 23 projects for US $ 5,351 million that will boost the closing of infrastructure gaps 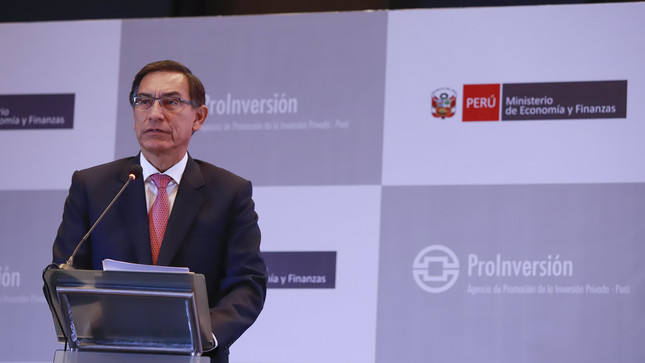 This Government of the Republic of Peru release was published using machine translation.

Lima, January 21, 2020.- The President of the Republic, Martín Vizcarra, highlighted the portfolio of 23 large projects for an investment of US $ 5,351 million, to be executed in the next 18 months, which will decisively boost the closing of gaps in infrastructure and economic growth of the country.

During the presentation of the Project Portfolio 2020 - 2021, the president said that this is a sign of the Government's commitment and commitment to private investment, productive growth, competitiveness and development.

“We need to execute infrastructure works, generate quality jobs and provide better services to our citizens. In that sense, of the 23 projects selected, 13 will be awarded for an additional US $ 2,300 million and 10 will be declared of interest for an amount exceeding US $ 3,000 million, ”he said.

The Head of State also informed that the portfolio of projects in maturation, to be awarded in subsequent periods, consists of 21 projects for US $ 3.2 billion of investment.

During his speech, he highlighted that the main projects include: the Massification of the Use of Natural Gas in seven regions (with an investment of US $ 200 million) and the Huancayo - Huancavelica Railway (US $ 227 million).

Similarly, section 4 of the Longitudinal Highway (US $ 464 million); the EsSalud de Chimbote and Piura hospitals (US $ 254 million); the Peripheral Ring Road project (US $ 2 billion); the Header Project of Lima (US $ 720 million); among others.

"These are all works that will improve the quality of life of our citizens, with access to natural gas in homes, better communication channels, greater access to health, rural electrification, drinking water, among others," he said.

He said he hopes that these projects will be executed quickly and that they will not delay, or be postponed due to unsuccessful procedures or lack of decisions and said he is sure that Proinversión will carry out more executive work so that the deadlines that are raised today are met.

The president also stressed that 2020 will be a year of greater momentum of the country's productive and social growth, advancing in the execution of the National Productivity and Competitiveness Plan and the 52 major works of the National Infrastructure Plan.

“These are the works that allow us to have confidence in the future of the country. Closing gaps is a priority of our Government. It is essential that all Peruvians can access basic services, attend to their health, study, and perform in their regions, ”he said.

In his speech he reiterated that macroeconomic growth is very important for the country but it is insufficient to end inequality and build a more just and sustainable country. In this regard, he stressed that growth has to be inclusive and equitable, to reach all households in the country.

At another time, President Vizcarra stressed that we are five days from the 2020 congressional elections, so he addressed all Peruvians who will attend the polls this Sunday, to urge them to make their decision responsibly and thinking about Peru.

“The Congress that we will elect all Peruvians this Sunday, January 26, despite the short period of validity, will fulfill an important task, both with pending political and judicial reforms, and in terms of legislation to continue promoting the development of the country,” Held.

He said that the act of choosing is a citizen right, but it is also a civic responsibility with the country, which is why, on the remaining days, citizens must evaluate the resume and proposals of the candidates, in order to cast a responsible vote.

Want to read more information about President Vizcarra highlights the execution of 23 projects for US $ 5,351 million that will boost the closing of infrastructure gaps?