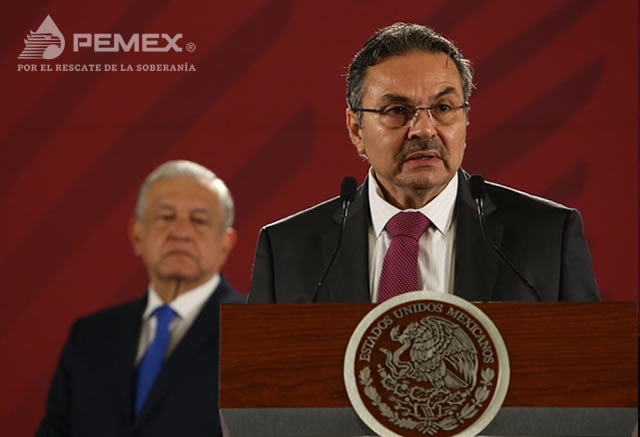 At Tuesday’s presentation of Pemex’s 2019-2023 business plan, Mexican President Andrés Manuel López Obrador (AMLO) insisted that he was acting appropriately in the rescue of the oil industry.

"We have done well in rescuing the industry, and we are optimistic despite the fact that the adversaries would like us to do badly in this and other things,” said AMLO, defending his plan to resuscitate the state-oil company as doubts mount in the investment community.

AMLO explained that this plan included special government support for Pemex for only the first three years of his six-year term ending in 2024. This includes budgetary adjustments and tax relief to enable Pemex to begin investing once again, adding that by the second half of his term, Pemex would stand on its own.

At the same press conference, Pemex CEO Octavio Romero Oropeza (pictured) offered further details of the plan, including a reduction in Pemex’s tax burden by 141bn pesos (US$7.4bn) over the next three years in the form of 66bn pesos in tax relief in 2020, 38bn pesos in 2021 and 37bn pesos in 2022.

A second element will require that the administration presents this year a legislative proposal to reduce the share of Pemex income, abbreviated DUC, that goes to the government. The proposal would lower the DUC from the current 65%, to 58% in 2020 and 54% in 2021.

One of the chief criticisms of the plan concerns its removal of farmouts, which were introduced under the 2014 energy reform and give private partners shared ownership of reserves and other benefits.

Instead, the plan relies on long-term service contracts to private companies, or CSIEES, that don’t include ownership of the infrastructure or the reserves.

A Moody’s analysis finds that the government will have to do more to meet its goals.

“Pemex and the Mexican government have laid out ambitious annual oil and gas production growth targets through 2024,” wrote the ratings agency, adding, “Pemex requires more investment to replace the fall in reserves and this implies that the support that the government has given up to now is insufficient.”

On June 5, Fitch downgraded the oil giant’s credit ratings to junk status; however, most analysts now agree that Moody’s will hold off until later this year with a downgrade, given the agency’s longer-term outlook compared to Fitch.

Set to win congressional confirmation as finance minister on Thursday, Arturo Herrera discussed the plan with legislators Tuesday, saying, "the business plan is the first step of dialogue with the rating agencies…Yes we have to worry about the rating, but above all worry about increasing the production of Pemex."

Herrera committed to support Pemex, because it “is not only one of the main sources of employment, but also one of the most important economic and financial assets in the country.”

He admitted that, although it is a complex challenge, "Pemex needs to invest more fundamentally in exploration and production; for that it needs a different tax treatment; Pemex's tax burden was so high that they preferred not to operate in some fields because they lost money.”

Moody’s argued that even with the announced support, Pemex would need more to increase its investment levels and restore its declining replacement rate.

In contrast, the plan presented Tuesday has exploration and development investment at 48bn pesos (US$2.5bn) in 2019 while Pemex’s plan outlines 58bn pesos for refining investment, ostensibly attached to the Dos Bocas refinery, planned to refine crude at a capacity of 340,000b/d.

The controversial Dos Bocas refinery looks to depend on the outcome of a new construction tender set to be announced July 26.

Major energy construction multinational Bechtel, considered to be one of the most capable firms to take on that project has already dropped out of the competition.

David Shields, an energy consultant and editor of Energía al Debate, told BNamericas that with the July 26 tender, “my impression is that companies are a bit scared. They see a government with a very tough attitude about getting this done very quickly.”

Its proven developed (PD) reserves have declined even faster, said Moody’s, with PD reserve life dropping to 4.5 years at the end of 2018, down from 6.6 years in 2014.

Faced with this, “ee believe that Pemex’s capital investment for exploration and production will be insufficient to replace reserves,” based on the assumption that oil will cost US$15/b to extract, and current assumptions on finding and development (F&D).

That projection changes significantly depending on the efficiency of extraction costs. Should efficiency dramatically improve to US$10/boe, reserve replacement in 2019 could reach 72% and 81% in 2020. Were it to climb to US$20/boe, on the other hand, 2019 replacement would only reach 36% and 41% in 2020.

It sets out 11 strategic objectives in terms of financial discipline, incorporation of reserves, production increase, industrial safety and more hiring, as well as strengthening national procurement, through which it expects to increase the production of fuels and petrochemicals.

Under the plan, sources of raw materials for the production of ethylene and its derivative would be diversified, as well as aromatics, with higher efficiency and the stated goal to boost fertilizer production.

A tougher approach to mining concessions and permits has resulted in suspensions of a string of Mexican projects – but others have been reactivated.