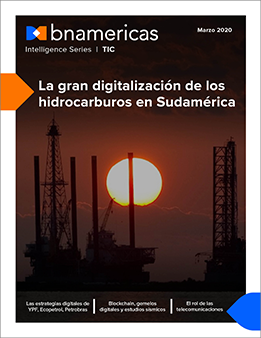 The main oil and gas companies in South America embarked fully on digital transformation starting in 2017, when they began designing technology policies at the center of their operations.

Petrobras announced in September 2019 the creation of the executive office of Digital Transformation and Innovation; Ecopetrol did the same with the digital vice presidency in 2018, while YPF created the executive management unit of Technology and Innovation in 2017.

Ecopetrol is connecting its refineries to get a real-time picture of the impact of operational decisions on the refining business. "We found that having real-time information on the resources that are wasted in the process of converting the refineries into the use of equipment and energy expenditure can increase the margin for each refined barrel up to US$0.50," says Ernesto Gutiérrez de Piñeres, digital vice president of the Colombian group.

YPF is facilitating access to information for everyone in the company when they need it; as well as letting operators report data on wells and refineries in real time through smartphones or wearables, such as glasses that offer augmented reality.

"What we want to do is have the information at the fingertips when it's needed, and capture relevant operating data in real time," says Sergio Fernández Mena, CTO at YPF.

Along with using artificial intelligence developed by Microsoft to enhance the safety of offshore workers, Brazil's Petrobras is working with the most powerful supercomputer in the region, the Santos Dumont developed at the developed at the Brazilian Center for Physics Research, to shoot improved seismic images and conduct real-time simulation of deposits.

While it's easy to think that the digital transformation of an industry known for innovation as just a matter of time, a series of circumstances had to occur for artificial intelligence (AI), the internet of things (IoT), cloud computing and blockchain to join the oil and gas value chain.

The sector went through a challenging period from 2014 to 2016 with the fall in international oil prices due to lower demand. In the same period, other industries were already operating under new digital standards.

The crisis produced significant operational changes in companies that, according to data from the consulting firm McKinsey, have reduced spending on wells in most basins by 40% to 50% compared to 2014 prices. That's a key figure if we consider that the construction and operation of wells represents 40% to 70% of the capital expenditure of an oil and gas company.

The operational adjustments carried out by most of the sector during the lean period have created the conditions to adopt digitization throughout operations: upstream, midstream, downstream and company management. With the rebound in prices from 2018, investments in exploration were reactivated, and with it the digital agenda, which will surely become even more relevant now that the coronavirus demand crisis and the price war between Saudi Arabia and Russia have created another crisis in the sector.

While concepts such as machine learning and predictive maintenance have been around for decades — France's Total has been working with them since 1990 — the drop in the cost of cloud computing made it easier for companies to create value from the massive data they generate, and which can be picked up by IoT sensors.

This has also happened with artificial intelligence, a fundamental part of the so-called industry 4.0. Juan David Leaño, business intelligence analyst at Mercado Libre, explains that most companies do not have the necessary hardware to execute the neural network algorithm processing that constitutes artificial intelligence. The equipment "is too expensive and difficult to implement," he says.

However, giants like Amazon Web Services, Alphabet (Google Cloud) and Microsoft (Azure), with services and tools in the cloud, have brought technology to a level that makes it readily available.

The speed at which the price-performance ratio is advancing in the field of computing, storage and bandwidth contributes to speeding up the adoption of digital infrastructure. Still, some technologies require more investment than others.

YPF's Fernández Mena affirms that the investment to develop IoT, for example, is much greater than "initiatives that are pure intellectual capital such as artificial intelligence"; that is, the development of algorithms.

Before technologies can add real value, companies need to know where and why they should be applied.

"It's very important to work with clients, especially because it's necessary to specifically detail which segment of the oil and gas industry [upstream, midstream or downstream] they focus on and what they require," says Liliana Fonseca Ramírez, specialist in Oracle architecture for Colombia and Ecuador.

"Each of them covers different things in cases that might seem the same and are not, such as the transportation, maintenance, storage and accounting of hydrocarbons or gas."

With their anti-competitive actions, between 2007 and 2019, the sanctioned economic agents caused an estimated damage of 13 thousand 392 million 54...