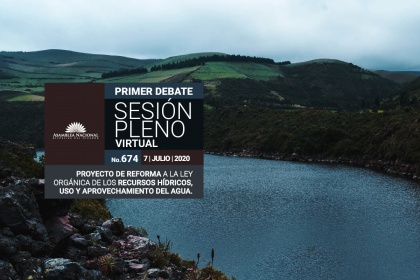 The Plenary of the National Assembly, in the continuation of session 674, processed in the first debate the draft Reform Law of the Organic Law of Water Resources, Use and Exploitation of Water, based on the report presented by the Commission on Biodiversity and Natural Resources from the previous period.

Freddy Alarcón, in his capacity as rapporteur for the report, recalled that by constitutional mandate the human right to water is an inalienable, imprescriptible and unattachable right, as well as essential for life.

Among other issues, the reform proposes the recognition of the managers of the ecosystems of the paramos. It includes several proposals, among them from the legislators, Luis Pachala, Kharla Chávez, Pedro Curichumbi and Héctor Yépez.

The norm foresees the guarantee of water quality, the recognition to the managers of the ecosystems of the paramos, as well as the respect of ancestral practices on community service of water use. Aspects related to the sanctioning regime and the values of the applicable fines for each case are also considered.

It is time to provide safe water to communes, communities, towns and nationalities, through decentralized autonomous governments, stressed Alarcón, when making a call to protect the source of life, to have a responsible use of water.

During the debate, it was highlighted, among other topics, that the wetlands in the Ecuadorian Amazon are disappearing, perhaps due to the lack of investment by local governments in sewerage, irrigation, and, above all, the action of the oil companies that evacuate. the waste in a disorderly way and go to the streams, as well as to the tributaries of the rivers, which are part of the water reserves.

Also, that the reform aims to make the chapter related to fines and sanctions more flexible, which should be analyzed technically and not politically. On the other hand, there were expressions to the effect that the current fines are unconstitutional, because, for example, for a minor offense, a peasant must pay between $ 400 to $ 4,000, which is not proportional to the offenses committed, nor does he sympathize with the economic reality of the country.

They showed their agreement to increase programs and projects aimed at the preservation and conservation of water resources, on the basis of public policies worked with the participation of all levels of government, water managers, as well as communes, communities, towns and nationalities.

There were voices in the sense that the State should be the one who coordinates with the autonomous governments, with the communes, communities, towns and nationalities, to preserve water resources, through incentives for managers who care for the moors, wetlands and other sources of water.

Other concerns of legislators mentioned the need to protect water sources, especially by freeing them from open-pit mining activities, in order to avoid contamination. Likewise, they expressed that it is essential that the decentralized autonomous governments establish wastewater treatment projects, so that the polluting agents in the cantons and provinces of Ecuador are countered.

After the intervention of 14 legislators, the president in charge of the room, César Solórzano, declared the first discussion concluded and, at the same time, arranged to send the project, along with the observations, to the Biodiversity Commission, to systematize the proposals formulated in plenary and prepare the report prior to the second debate.

In the first quarter of 2022, they entered: 2 new generation plants with about 11 MW, 1 energy transport project in the National Transmission Syste...

Four companies pre-qualified to participate in the public selection process for the Northeast Transmission System i...

Cuenca has its first charging station for electric vehicles

37 companies acquire rights to participate in the Public Selection Process for the concession of the Non-Convention...

Want to read more information about Plenary processed in the first debate the project of reforms to the Law of Water Resources of Ecuador?