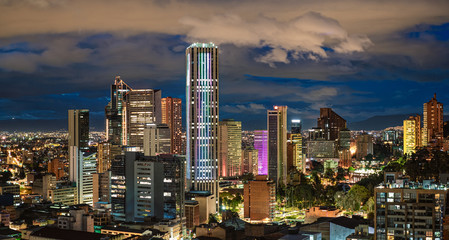 “Colombia is open to do business,” President Iván Duque told the 22 international investors with whom he met Thursday in Davos (Switzerland), as part of his participation in the annual meeting of the World Economic Forum.

During the work session, organized by ProColombia and held at the Hotel Grisha, in the city of Davos, high-level representatives of companies related to different sectors of the world economy participated.

During the event, in which he was accompanied by the President of ProColombia, Flavia Santoro, and the Minister of Commerce, Industry and Tourism, José Manuel Restrepo, President Duque presented the positive outlook for investment in Colombia for potential investors, and He presented the Government's commitment to achieve a sustainable and responsible investment agenda.

By inviting businessmen to invest or deepen their investments in the country, the President declared himself optimistic about the way Colombia is moving in its administration.

“I am a very optimistic person regarding the way Colombia is marching, and I am also very optimistic because I believe that throughout this process that we have seen in many countries of Latin America and the world, our democracy is going to see strengthened, as well as our institutions, ”he said.

And he added: “What I can tell you is that if we look a year ago and look today, we see that most of the things we said happened in the country. That shows that we are very committed to achieving the goals we have set in our National Development Plan. ”

In development of his presentation, the Head of State highlighted the strength of the Colombian investment and economy, which has been achieved after the first 18 months of his Government.

“We started our administration, in August 2018, with an economy that was growing at 1.4 percent. By the end of 2019, I think the growth will be close to 3.2 - 3.3 percent, which means that we have doubled the economic growth we received when I took possession, ”he said.

"But what is more important, when compared to the Latin American average, the world and the OECD (Organization for Economic Cooperation and Development), is that Colombia is going to have a higher growth," he said.

In this regard, he considered that these results have been possible because “we have made bold decisions”, for example, by presenting an initiative to reduce corporate taxes, “in order to achieve greater investment and also to promote entrepreneurship, innovation and transformation ”.

Likewise, the President highlighted the substantial increase in foreign investment in Colombia and the increase in tax collection - which in 2019 closed as the largest of the last seven years, growing more than 10 percent - as well as the deficit behavior fiscal, where there was the greatest reduction in the last eight years, achieving for the first time a primary fiscal surplus.

"Those things, in my opinion, are great achievements," he said.

In his speech, the Head of State referred to the non-conventional renewable energy revolution that is being developed in Colombia.

“When our administration started, Colombia had less than 60 megawatts of installed capacity in solar energy, and wind power was 0.1 percent of the energy matrix. I said that we had the great goal of reaching 1,500 megawatts very soon, and many people thought that that was a very ambitious goal and that it was, perhaps, an impossible goal.

“But we already have two options: long-term contracts, and we also did an auction on the reliability charge. From now on, we have ensured that, by August 2022, we will have 2,500 megawatts of installed capacity, which means that we will increase by 50 times what we receive when starting this administration, ”he said.

"In percentage terms, that is the biggest leap that a Latin American country has experienced with respect to non-conventional renewables in the energy matrix," he said.

The President also detailed to the investors the country's advances in telecommunications, thanks to the approval of the Law of Modernization of ICT, an initiative promoted by the National Government.

"We expect that, by August 2022, we will have 70 percent of the Colombian population with high-speed internet," he said and added that a bidding process for the 700 megahertz band was advanced, thanks to which "they have new investments have arrived in Colombia ”.

According to the Head of State, Colombia is moving quickly to achieve 5G networks, which we believe are very important for the development of artificial intelligence.

Another issue to which President Duque gave great relevance is that of agricultural production and the improvement of the quality of life of the inhabitants of the countryside, through programs such as 'Contract Agriculture'.

“In these 18 months, we have not only managed to open the market for many of our products, but we also have Contract Agriculture, where small farmers sell their products without intermediaries. At this time, we have 30,000 small farmers under this mechanism, which has not only insurance but also access to the lowest cost loans in the Colombian market, ”he said.

"This year we want 100 thousand more to achieve it, to meet the goal by August 2022, which will be 300 thousand small producers in Contract Agriculture," he said.

Likewise, he pointed out that during his Government a total of 526 thousand families in the country had access, for the first time, to the drinking water service, which is a great achievement, taking into account that the initial goal was to benefit 300 thousand families.

Regarding tourism, he stressed that 2019 was the best year in the history of this sector in Colombia, “because we received more than 4.5 million non-resident visitors, who visited the country with the highest hotel occupancy rates last years".

The Center for the Fourth Industrial Revolution of Medellín, first in a Spanish-speaking country, and the signing of agreements with technological giants such as Amazon and Microsoft, to boost its presence in the country and the generation of employment, were other achievements highlighted by the Colombian Head of State before international investors.

On the other hand, President Duque explained the progress of the Peace with Legality policy, which includes from the reduction of homicides to the promotion of Development Plans with Territorial Approach (Pdet) in areas affected by violence, an initiative that has private sector participation

“We have also managed to reach different regions of the country severely affected by violence and we have developed Development Plans with Territorial Approach. These are being articulated with companies that can not only pay their taxes, but have brought positive impacts in these regions. We have more than 600 projects in those regions, and my commitment is to carry out that task, ”he reiterated.

At the end of the work session, President Duque answered questions from the auditorium, during which he referred to Colombia's investment opportunities, and programs and projects in which the country is focused.

“We have to accelerate the transition of networks in Colombia, and that is our main objective, because we do not believe that telecommunications is reduced only to antennas, fibers and cables, but that it has to do with only one thing, and it is the quality of life, ”he said.

“So, if we want to reach telemedicine, virtual education, smart cities and the internet of things, then, obviously, we need to have a 5G network to be at the forefront; otherwise, we would not achieve it, ”he said and added that we are“ taking Colombia along that path and we want to speed up the process. ”

“I am convinced that connectivity is a very important element to close social gaps. That is the reason why we are going to organize five auctions this year, five bidding processes to ensure that 10 thousand communities or urban areas can live that transition over the course of next year, ”he announced.

Likewise, the President indicated that this year the public policy for Fintech and financial education will be presented, because “I am convinced that mobility, 5G networks, financial services technologies, will make Colombia a leader in terms of financial technology ”, which“ will achieve greater bank inclusion, greater banking ”.

The President emphasized that “we really need telemedicine in Colombia. We need it urgently, because there are huge distances between rural areas and urban centers. ”

"If we have telemedicine and we have places in the country where people can go and receive a description of what they have, we will improve the quality of life," he said.

The project to consolidate electronic invoicing, the opening of a bidding process for new 4G highways, the navigability of the Magdalena River, the Canal del Dique project, the next stage of the El Dorado Airport in Bogotá, the Special Economic Zone of Cúcuta, the Strengthening agricultural production and exports of small and medium enterprises and circular economy programs, were other Government projects cited by President Duque.

BNamericas takes a look at market developments that investors should pay close attention to.

Facts to believe: The Energy Transition in Colombia is a reality

Cost of the kilowatt hour in energy bills may not increase in the remainder of the year due to the emergency of COV...